I spent some time this morning perusing the day's headlines from several different news organizations. I was particularly struck by what each different organization considers newsworthy enough to be on their "front page" feeds.

From Fox News (okay, all you libs, just sigh, shake your heads in disgust, but keep reading, okay?), we have the story of three Navy SEALs who are being brought up on assault charges for giving a bloody lip to a terrorist we had been tracking down for capture since he did this: 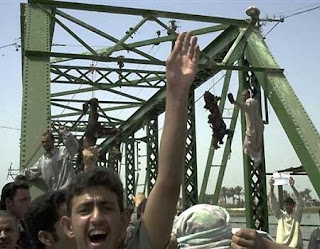 AP
March 31, 2004: Iraqis chant anti-American slogans as the charred and mutilated bodies of U.S. contractors hang from a bridge over the Euphrates River in Fallujah, Iraq.
The story tells of three of America's finest who have been involved in a manhunt since the above-pictured incident and what has happened to them since they successfully captured one of the world's most wanted terrorists. When the terrorist (oh, I'm sorry, "detainee") whined to the Iraqis about how he had gotten a bloody lip during the capture, it somehow resulted in these three American heroes being brought up on charges instead of being given medals, as they should have been. Here's the link to the story:
Navy Seals Face Assault Charges

The next item is from ABC News. Its' about Obama pardoning a turkey. Need I say more?

The third item is from the New York Times. It's about Roman Polanski's being granted bail. You remember Roman Polanski, don't you? He's the famous film director who fled the U.S. some 30 years ago after being convicted of "unlawful sex with a minor" after drugging, raping and sodomizing a 13-year-old girl. He's finally in custody in Switzerland after living the good life in Europe all this time. He's just been granted bail, probably because a rich, famous man with friends all over the world who eluded the authorities for decades isn't a flight risk at all. Here's the link:

The lead story on the Fox News feed was the Navy SEAL story. It wasn't on the list under any of the other 16 news outlets I checked this morning. I truly feel this story is one of the most important of the day. I know Climategate is a really hot story as well. Even so, only NPR, Fox and Drudge had it on their list today. I guess CNN couldn't have reported either story because it had to leave room for the news that Oprah is going to interview Obama at the Whitehouse for Christmas.

Why did I choose the Navy SEAL, Polanski and Turkey items when there were clearly other news items this morning? Mostly because I found it interesting to compare and contrast the subject matter of the three stories.

In the first story, we have three enlisted men--all some of the most highly-trained personnel our armed services have to offer. The fact that they are being charged for assault for allegedly giving a fat lip to a detainee after capturing one of the most wanted terrorists in the world is astounding to me. What are we to say now to young people who may be thinking about joining the armed forces? "I think it's great that you want to serve and protect our freedom, but you'd better be really careful or you could find your self in a military prison or under court martial for giving the enemy a boo-boo." Just imagine if we'd have used this politically correct nonsense in World War II. We'd all be speaking Japanese.

Let's speak truthfully here. Our military combat personnel are trained to ultimately kill the enemy, and we're trying these young men in a military court because the enemy suffered a fat lip? If President Obama, our Commander-In-Chief, has any power to make this go away for these three heroic men, he should get right on that.

Oh, I'm sorry. He's too busy pardoning turkeys. I know that every President since 1947 has pardoned a lucky Thanksgiving turkey. I wasn't born without a sense of humor or a sense of nostalgic traditionalism. But we now live in a country in which a turkey can be "pardoned" from the fate of many of his fellow turkeys; meanwhile, our servicemen and women, who actually do something to advance the cause of liberty and freedom here and around the world (sorry, turkey, but you have to admit you really don't do much in that regard) are at risk of going to prison and losing their hard-won careers for doing their jobs.

Oh, and we mustn't forget Mr. Polanski. This child-raping bastard will be sitting pretty in a mansion in France under house arrest for God knows how long, after avoiding a sentence for a crime he plea bargained down from child rape and sodomy to "unlawful sex with a child." Conversely, the three Navy SEALs will sit in a military court and be sentenced--and live out those sentences--for making the world a safer place in which to live.