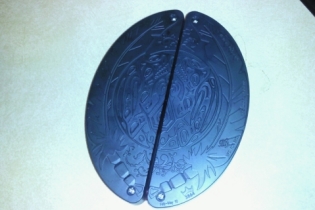 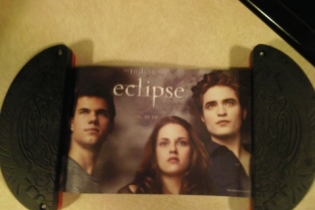 Gotta go.  I need to look up movie times for "Eclipse."  I think I might just bring my granddaughter to that instead of "Whinnie the Pooh." I'll make sure to buy her a T-shirt first.  I wonder if they come in a size 3T?
Posted by Friendly Neighborhood Republican at Friday, July 29, 2011 No comments:

On Pawlenty and Lady Gaga

So, T-Paw likes Lady Gaga, particularly her songs, "Bad Romance," and her a cappella performance of her song, "Born This Way" on her HBO special.  There are more than a thousand articles on the subject available on the internet, if you'd like to read them.  The most succinct one I found was this article from USA Today.  The StarTribune article, as is typical of that publication, crossed the line between news and opinion.  It seems this breaking news had a lot of people talking.

I know this confession won't be big news, but I, the Friendly Neighborhood Republican, "like" Lady Gaga too.

I know, it's shocking. A Republican, mid-western grandmother thinks Lady Gaga is really talented. I know I'm not a member of her typical fan base, but that's okay.  I'm a very music-oriented person, and I have a lot of eclectic tastes.  If you were to look at my playlist, it would include sacred choir music (performed by my son's high school choir); Prince, more Prince, and still more Prince; Vince Gill; Stevie Ray Vaughn; Meshugah; all of my son's performances that my husband burned for me; Mozart piano concertos; Aerosmith; and, of course, Elvis.  And I'm leaving a lot of musicians out.

I harbor no guilt or conflict about any of my choices.  I come from a very musical family, and frankly, neither I nor my children or grandchildren would exist without a combination of 50's rock-n-roll, blues, and classical piano.  It's a very long story.

So, if my choice to appreciate the talent Lady Gaga clearly exhibits as a songwriter, singer, musician and performance artist is a problem for anyone, given my political leanings, that's just too bad.  But contrary to what you might think, I'm not advocating that the two are mutually exclusive.  They're not.

Pawlenty, when asked whether the lyrics of Gaga's song, "Born This Way," might be contrary to his belief system about whether or not gay people are born gay, he said, "The science isn't clear either way on that." Even the liberal publications had to admit he was right. It was a round-about way of saying he doesn't disagree with the song's message.

Pawlenty, like most Republicans, has never said he hates gays and everything they stand for.  So why is it news that he appreciates the talent of a woman who has become a contemporary gay icon?  He even argued for gay marriage rights as a Minnesota legislator.

He now says he regrets his support when he was legislator. Sadly, Pawlenty, like Michele Bachmann, has aligned himself with the religious right segment of the Republican party for his presidential campaign. That's where we differ.

I'm coming out to say that being Republican doesn't automatically mean you are against gay rights. My gay, Republican nephew would agree with that statement.  I plan to write much more about gay rights as it relates to Republican politics in the near future.

But for now, let's just say, stop being shocked that a mid-western Republican would be a Lady Gaga fan. If you are the least bit scandalized or feel Republicans are somehow hypocritical for being fans, I say you're very closed minded, something liberals accuse conservatives of all the time.

I also say, as a preface to a series of upcoming writings, that the cobwebs needing to be swept from the hinges of the doors slammed to new ideas and anti-stereotyping don't exist in the minds of all Republicans.  They just may belong to members of the "tolerance party" who can't seem to accept something as trivial as Tim Pawlenty's musical tastes, just because he happens to be a Republican.
Posted by Friendly Neighborhood Republican at Wednesday, July 13, 2011 No comments: