On Flags and Health Care "Reform" 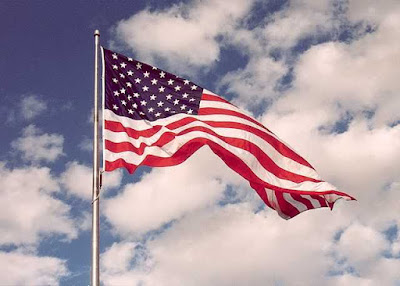 If this health care reform monstrosity passes (I hear they may try to do it as early as tomorrow), I will fly my flag at half mast.
Rules about such things say only the Governor of a state or the President of the United States can order flags flown at half mast and only for certain reasons, such as the death of a former president, etc.
Who will have died?
Liberty.
Who will have ordered the flag's lowering?
Me.
If they can do this to my country and to my family and to me, then I can declare whatever I want about my own flag. Because I will feel very separate from the government. I almost just wrote "my" government. But it won't be mine anymore if they do this awful thing to us, if they get away with what they are trying to do to our beautiful country.
Because it will still be my country. It will still be my flag. But Obama won't be my president anymore.
I have always said, even if I disagree with a president or if he has shamed our country (Clinton), he's still my president. I don't feel that way anymore. This is too much. It's too underhanded. Nancy Pelosi has the power of a Queen back when Queens had power, and Obama will sign this thing into law, complete with provisions that it can't be overturned. This is not how it's supposed to be.
This spring I will travel to Arlington, VA to bury the ashes of a wonderful man. He was a Marine Captain in World War II in the Pacific theater. He was in charge of all the marines on the U.S.S. Missouri, where the peace treaty with the Japanese was signed, ending the war.
He will be buried with full military honors at Arlington National Cemetery. I dearly loved this man. He fought for our freedom, our liberty, our flag.
So my flag is mine to do with what I will because I am an American and this lovely man fought for my freedom. You may decide what you wish to do with your own flags, if you have them. You can join me in this expression of grief, or you can find your own way to express yourself. I will lower my flag if these people get away with this abomination on my country and the death of its liberty.
If you think I've gone too far, then you don't know what is really in this bill.
This is just my way. And at least for a while, I will still be free to express myself however I choose.
Posted by Friendly Neighborhood Republican at Wednesday, March 17, 2010